“We, Women of Michałów State Stud” 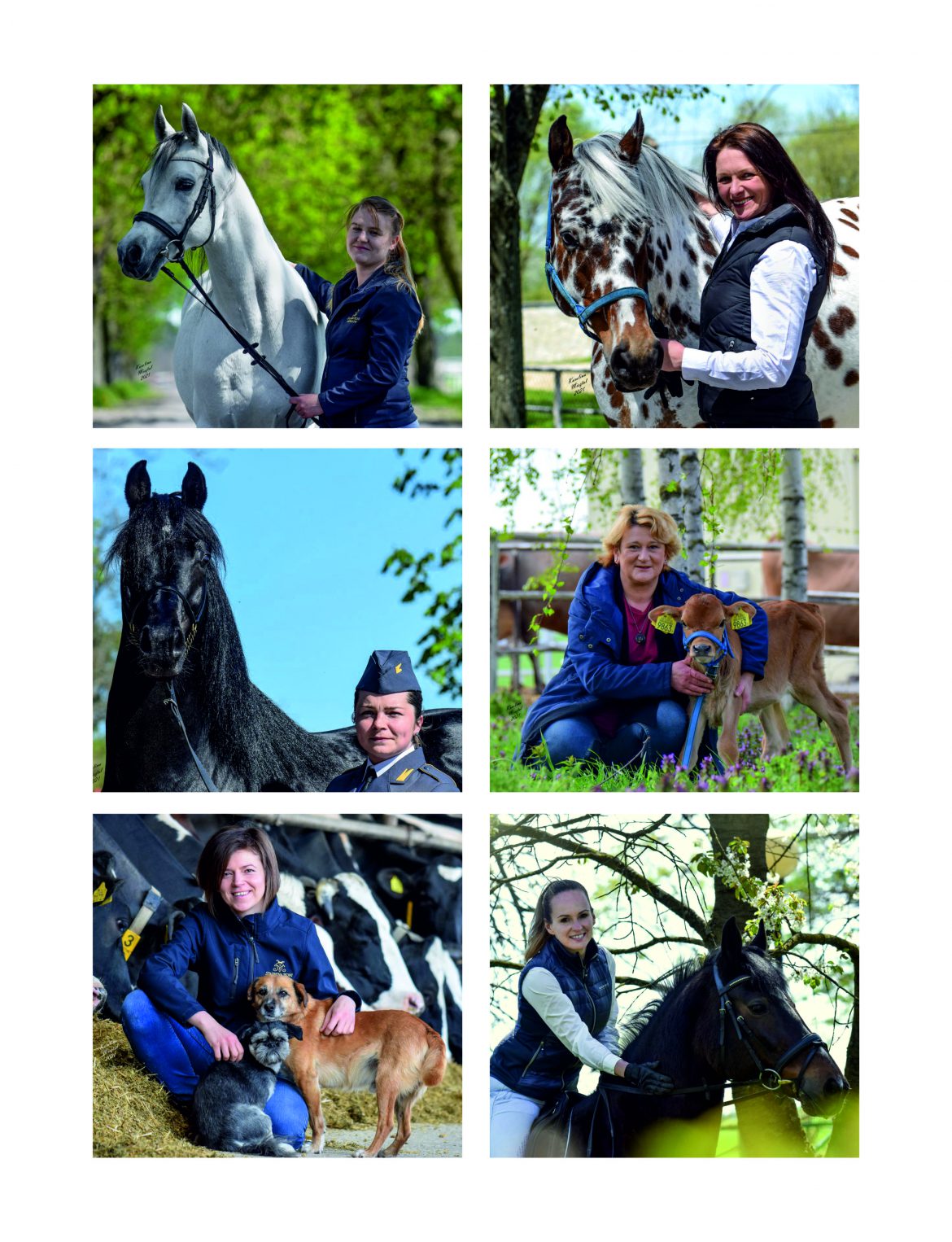 We, Women of Michałów State Stud

It will be an extraordinary story about a few women, exceptional, strong, courageous, who face challenges every day and make their dreams come true. They are brave enough to break stereotypes. They are brave enough to be an inspiration for other women … and the Michałów State Stud, located in the charming Pińczów area, has become their second home and a place of fulfilled hopes.

Michałów State Stud is known worldwide for its wonderful horses. The number of titles and victories at the Championships for Arabian Horses over the years is huge. Working at the stud is extremely difficult. It requires not only physical effort, but also a lot of self-development. Managing stables with almost 400 horses requires knowledge, willingness to gain new experiences, the courage to make decisions and to take responsibility for them. One of the representatives of the female part of the team is Marta Jaros, who has already become known to public during riding competitions with her beloved gray Arabian stallion, bred and owned by Michałów State Stud, Złoty Medal (QR Marc x Złota Orda / Pesal). Last year, they received the ECAHO award for the best Arabian horse participating in shows under the saddle. Złoty Medal, trained and ridden by Marta, was awarded the title of “High Point Horse of the Year” in the “Traditional Arabian Riding” category.

“Choose a job you love and you will not work a single day in your life – the words of Confucius, quoted by me, refer not only to me, my approach to the work that I do at Michałów State Stud, but also to all my colleagues, who are connected emotionally with this extraordinary place. They approach their duties with maximum commitment, often devoting not only their time and energy, but also a part of themselves. We all have passion and love for Arabian horses, which connects us all in a special way. Following this thought, it is the fascination with horses that affects our entire life, not only professional life. In that way, it defines, who we are. My adventure with the Michałów State Stud began during my studies, when I got the opportunity to do internship in order to gain knowledge from professionals among the most beautiful horses in the world. I have always wanted to devote my life for horses, what I managed to achieve in 2017, after I had graduated from Agricultural University of Kraków. I started working in Michałów State Stud, in a magical place, where the winners of the most important championships live in the stables, the long-awaited foals are born every year, next generations of horses grow up, and their achievements are written in history. What do I get from working in this place? It is impossible to list all the advantages, but most of them are obvious to every Arabian horse lover. I have one thought in particular – this work teaches me humility. Despite a lot of duties this work also gives us the opportunity to experience extraordinary moments. They allow us to slow down and appreciate the beauty of Michałów State Stud.” – Marta Jaros, Livestock Production Specialist of Michałów State Stud.

While performing her daily duties, Marta can always count on the support and fruitful cooperation of Aneta Morzonek and Maria Szyper, who work as Deputy Equerries. They are women with extremely strong characters, great individualities. In both, professional and private life, they follow the principles to which they remain faithful. Each of them also pursues their equestrian passions.

“Michałów Stud is a land of beautiful horses! Apart from the worldwide famous Arabian horses, it is also known for unique appaloosa Angloarabian horses. These horses fulfilled my heart. The story began in 1959, when the late Ignacy Jaworowski, the director of Michałów State Stud, brought appaloosa stallion Tarzan (Bars × Łasica / Furioso VII-6), which became the beggining of appaloosa Angloarabian horses in Michałów. Back then, these horses were used for work beacuse they were very durable. They were a man’s daily partner in difficult farming activity. Over the years, these horses were used as draft horses in colorful harnesses, which made many people impressed. As a child, I remembered the image of a man who rode next to me, then a little girl, a huge “dotted” stallion. My heart pounded, and I was unable to utter a word out of admiration for this animal. It was then that my dream of riding such a horse was born. Do dreams come true? Yes, of course! Michałów State Stud is a place where, in addition to my daily duties, I have the opportunity to work with appaloosa Angloarabian horses. It is very important to me. I work systematically under saddle with the 7-year-old gelding Baszkir (Bonat x Ballada / Birkut), who is my friend and inseparable partner while walking in the forests near Michałów. The Michałów State Stud is my second home!” Aneta Morzonek, Deputy Equerry of Michałów State Stud.

“My adventure with Arabian horses began in my hometown, Kurozwęki. I was fascinated by these horses. They fullfiled my heart so much that I decided to spent my further education in Janów Podlaski, where I met people with great passion. Another challenge I faced was starting of work at Michałów State Stud at the beginning of March 2012. And I don’t regret this decision! I deal with the most beautiful horses in the world and additionally I develope myself in horse riding. I work with stallion Forman (Wachlarz x Formia / Gazal Al Shaqab), bred and owned by Michałów State Stud and I must admitt that he has the special place in my heart.” Maria Szyper, Deputy Equerry of Michałów State Stud.

But the stud is not only horse breeding. From the very beginning, dairy cattle breeding and milk production have been an extremely important part of the economic activity, which is a strong financial pillar that guarantees everyday functioning. Michałów State Stud keeps a herd of jersey cows, while the farm in Lubcza keeps a herd of holstein-friesian cattle. Two wonderful women are great at managing this area of activity: Marzena Liśkiewicz, the manager of the jersey herd, and Daria Róg, who is responsible for the holstein-friesian cows.

Marzena Liśkiewicz, who is responsible for Jersey Herd in Michałów State Stud.

„My adventure with Michałów State Stud began during winter internships, which I was obliged to do while studying at the Agricultural University of Krakow. It was not my choice but a coincidence of several circumstances that I ended up in this place. I must admit that initially I was not enthusiastic about it, because I had never been interested in Arabian horses before. The wonderful people I met here, full of commitment and passion, stories told by them, beautiful horses and the possibility of cooperation with them made me completely lose my mind for this place. Thanks to then the President of the Board Jerzy Białobok and his wife Urszula Białobok, who was the main breeder at the stud, I was able to participate with the crew in numerous national shows and annual breeding inspections or during opening the pasture season for horses, which was full of emotions and was unforgettable experience! However, Michałów State Stud is not only distinguished by Arabian horses. It is also Jersey and Polish Holstein-Friesian dairy cattle. Internships in the cowshed and national cattle shows in which I participated with Michałów State Stud made me decide to sacrifice my professional life for dairy cattle farming. I am very sentimental about cattle beacuse “Thanks to them” I started a happy family. I can confidently say that the Michałów State Stud and particulary farm in Lubcza, which I am responsible for, have become my second home!” Daria Róg, Livestock Production Specjalist of Michałów State Stud.

At the end of last year Monika Dwojak joined the team. She deals with the issue related to marketing and PR activities. Known for her uncompromising attitude, stubbornly pursuing her goals and in love with her two mares. For many years he has supported Michałów State Stud horses, which took part in championships and kept her fingers crossed for their successes.

“Horses have been my passion since I was a child. My grandfather used to have grey mare which was his partner in agricultural duties on his small farm. He allowed me to ride her. One family story tells about me, at the age of three, riding bareback and shouting to my father, who led the horse: Daddy! Faster! Faster!. My mother always says that her hair turned grey at that moment.  I showed up for the first time at Michałów State Stud in 2012 and I must admit that this place fullfilled my heart. Extremely charming landscapes, magical atmosphere and professionalism of the entire team made the stud home for my two Angloarabian mares M Bryza (Dybicz x M Basia / Hedar) and M Bonanza (Ghana x M Bryza / Dybicz), and for me a place, in which I spent my free time. Over the years, I have met many wonderful people, who have devoted their entire lifes to their passion for horse breeding. It is a great experience to cooperate with them, observe them at work and support them in their pursuit of their goals. I have always dreamed of joining my professional life, connected with marketing and PR, with my passion for horses. Michałów State Stud brings my life together and makes it completed. ” Monika Dwojak, PR Advisor of Michałów State Stud.

The life of women at the Michałów State Stud is fascinating. Every day they face the challenges. They are successful. They fail sometimes, but what is the most important, they never give up. They dream every day and prove that if you can dream it, you can do it.

PDF version of the article