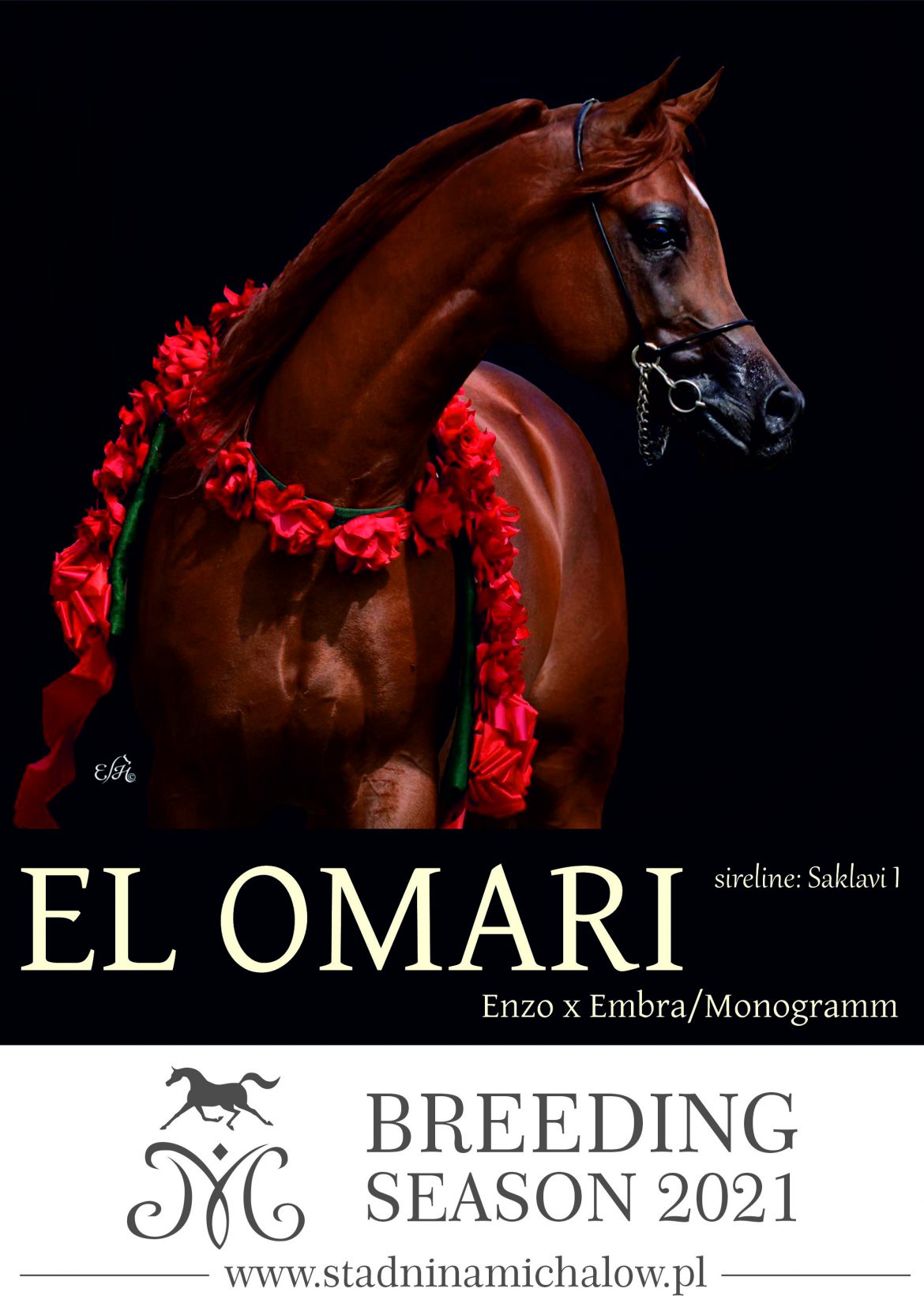 The chestnut EL OMARI (Enzo – Embra / Monogramm), being the leading stallion at Michałów State Stud, is a stallion whose semen should be seriously considered when planning breeding program.

This representative of the Saklawi I is the son of the American stallion ENZO, whose male line: MAGNUM PSYCHE – PADRONS PSYCHE – PADRON, became famous for their show talent and winning numerous titles. ENZO made its presence known in Poland as a sire, leaving distinguished offsprings, including mares: PALABRA, PERESPA, PIACOLLA, WITONIA or stallions: ALBANO, EMPIRE and EL OMARI.

The pedigree of EL OMARI on his dam’s side, EMBRA, is a true crème de la crème, reaching through EMILDA and EMANACJA to the mare EMIGRACJA, whose influence on the shape and quality of Michałów State Stud herd is stunning.

EL OMARI, already as a yearling, paid attention to himself, winning the title of Reserve Champion of the Autumn Show in Janów Podlaski and a year later not only repeated this success, but also added to his achievements the title of Natoional Junior Reserve Champion Stallion. At the age of 5, he was named the Polish Senior Champion during the National Arabian Horse Show, which was his crowning achievement. Each time EL OMARI delighted the judges not only with the type and conformation, but above all with the excellent, effective movement with the so-called „loose shoulder”.

EL OMARI offsprings makes our hearts beat faster during breeding shows. He proved his value as a stallion at Michałów State Stud leaving excellent offsprings. The first mare that I would like to recall is the one with the sculpted head, POGANINKA (out of Pentra by Poganin), which with great score of 94.17 points won her class and won the title of Champion during Junior Spring Show in Białka and was awarded the title Best in Show (2017). She achieved another triumph in Nowe Wrońska. With the first place in her class and a score of 93.13 points, she left the show as Junior Champion at Al Khalediah European Horse Festival (2017). Undoubtedly, the most important achievement of POGANINKA was obtaining the title of European Reserve Champion in Verona (2019), where she received a total of 93.13 points. POGANINKA during all above-mentioned shows was led perfectly by Paweł Syliwoniuk.

Looking back to Junior Spring Show in Białka that took place last year, we should mention the dark bay daughter of EL OMARI out of PARMANIA (Kahil Al Shaqab – Parmana / Al Maraam), PESALINA, which delighted the judges. Artur Łojowski presented all her advantages, thanks to which she won the class very confidently, receiving 92.83 points. In the final championshipday she won a gold medal, which proved that Saturday victory was not accidental.

EL OMARI offsprings bred and owned by Michałów State Stud also fulfilled the hopes during National Show in Janów Podlaski, 2020. At this point, I would like to focus on the performance of ELGAROLIA out of ELGANZA (Sanadik El Shaklan – El Ghazala / Ekstern), led by Paweł Syliwoniuk. ELGAROLIA won the two-year-old fillies class with a score of 92.50 points with high marks for type, head and neck. In the Sunday National Junior Fillies Championships, she outclassed her competitors and won the highest trophy, which made us proud.

The stallion EL OMARI was chosen in 2016 by the Stud in Białka, and as a result of breeding the chestnut mare BINT ERMINA by Kabsztad, the colt BELMARI was foaled. BELMARI has been quite successful in the show rings. He won the silver medal of Junior Spring Show, the title of Polish National Junior Reserve Champion Stallion and two-time Polish Junior Reserve Champion Stallion. Janów Podlaski State Stud in the last breeding season also decided for using EL OMARI in their breeding programme and we will be able to look at the results of his offsprings there soon, because foals were noted on the 2021 foaling list.

EL OMARI has a double value for me. Not only does he pass show predispositions to his offsprings, but also became famous as the sire of FERRMARIA out of Fermata by Poganin, which in 2019 foaled the phenomenal and undefeated colt FERRUM by Michałów State Stud stallion MORION. I believe that his young daughters, starting their breeding careers, will become outstanding mothers.

Our offsprings by EL OMARI foaled this allow us to be very optimistic about the future. My answer to the question „Is EL OMARI worth using him in breeding?” is „Yes!” I would like to draw your attention to the features that he passes on to his offsprings, i.e. head with wide forehead, with incredibly shortened muzzle, and at the same time with a well-shaped occipital part. Importantly, foals are in so-called long lines, with dynamic and effective movement. EL OMARI breeding is available at Michałów State Stud offer.

Life at Michałów Stud “A few words about the EQUATOR …”